Here you can find information about the Cheza Ngoma association and activities, as well as the schedule and prices of classes and workshops.

THE STORY OF MENARD MPONDA

Menard Mponda, as we know him today, is an artist who expresses himself in a multidisciplinary manner. Besides performing as a dancer and a drummer, he does teaching, choreographing, composing, producing and directing. What has the path been like that led him to become what he is now?

Menard was born in Kyela in Mbeya district, but later on the family moved to Mbalizi, which is another small town in Mbeya, southern Tanzania. His father was a teacher and the mother took care of the twelve children at home. Dance and song belonged to the everyday life of the Mponda family. The father encouraged his children to drumming. He played the big ligambusa drum himself and the children accompanied with the ngoma drums. It occasionally happened that the father – instead of coming straight back home from work – visited a bar on the way. As he was approaching home, he started singing already at a distance. This was a sign for the kids and neighbours that drumming and singing would begin soon.

The drum calls for everyone

When Menard started school, he was excited about sports as well as music. In the school curriculum there were afternoons when children could to choose between sports, domestic work and dance. Menard was one of the few who chose dance. The school headmaster Mr.Mwakisyala was an avid dancer. He taught Menard a Ngoni tribe dance called Mganda wa Kimanda. Many other Ngoni dances were danced and learned at home. The explanation for the name of Cheza Ngoma association in Tampere can also be found in this period of time in Menard’s life. The ngoma drum not only accompanies, but it is also an instrument for communication with the dancers. The interaction between drummers and dancers is an absolute must. This interaction is the heart of African dance. Menard was chosen to lead the school dance group. In Mganga wa Kimanda dance that belonged to their repertoire the leader has to keep on repeating a phrase “cheza ngoma yako, step one two three and we go.” This is to inspire both the dancers and the audience. To make the dance work the leader has to be very charming. His presence must deliver the message in a manner that urges people to join in the dance and music. Cheza literally means dancing and ngoma is a type of drum. In this concept Cheza Ngoma means ”join in the dance and music”. Cheza Ngoma became Menard’s nickname at school.

The secondary school was not far from home. Menard was eager to participate in the dance festival, which was held annually in the hometown. Over time, dance and music began to take more and more time at the expense of school work. Due to long absences, Menard was expelled from school. He moved to Mwanza to live with his brother and continue going to school there. Instead of school, however, he ended up helping his brother and family in the garden work. One year later Menard’s father intervened. He arranged for his son a place to study at another secondary school in Mbalizi. The headmaster of this school wanted to support the students in the activities they were interested in. Thus, Menard was given the task of organizing a dance group at school. The group became famous in the suburbs and they often performed. Menard was awarded for his efforts, when he finished school. For graduate studies Menard applied for Bagamoyo Art College in East Tanzania. He studied traditional and contemporary dance, traditional and modern music, drama, criticism, acrobatics, language, sociology, fine arts and musical instrument making there for three years. In Bagamoyo he became acquainted with Finnish cultural researchers, who had a joint project with the art school. When discussing with them Menard became interested in Finnish culture and he heard about Orivesi College. After a short correspondence he received an invitation to Orivesi. From Orivesi to Tampere. Menard stayed at Orivesi College for two years. During the first year he both studied and taught, the second year he was only teaching. His workshops were very popular. They studied traditional Tanza-nian dances, his own choreographies and, of course, playing the ngoma drums. At that time Orivesi College was a truly international establishment with music from everywhere in the world. Petri Karvonen from Tampere participated in Menard’s dance workshops in Orivesi. He suggested that Menard start dance courses in Tampere. In order to seek financial support for dance courses Menard, Petri, Jonna Järviö, Soili Pentikäinen, Outi Amanor and Ulla Bordi decided to set up an association. Cheza Ngoma was founded in 1998. At some point Menard wanted to try something else. Business had always fascinated him. So he went to study in a BA program of international business in Valkeakoski. The next step was to run a restaurant with his wife Marjut. Their karaoke bar had a steady base of customers. Menards favorite song “Mombasa” was a local hit. But the passion for music and dance persisted. After a few years the man realized that there was not enough time for everything. But he never wanted to give up music. Therefore, he gave up from the work in the bar and continued as a dance instructor. Among the audience at Cheza Ngoma’s gigs there were a lot of people who were clearly interested in African music. In addition, the customers of Menard ́s bar were yearning for more. The idea of a festival soon began to develop. The first Fest Afrika saw daylight in 2002.

A teacher of Bagamoyo College, Arnold Chiwalala was completing his doctoral studies at the Sibelius Academy in the beginning of 2000. Menard had participated in the artistic performanceincluded in Chiwalala’s doctorate and learned to know the establisment. The Academy’s international Bachelor of Arts programme Glomas was exactly suited to Menard’s needs. In the Glomas program-me students visit the participating universities and familiarize themselves with different kinds of world music. In the Glomas programme Menard has made friends with several musicians who have later visited Fest Africa, among others Moussa Diallo and Keld Hosbond .Menard ́s master’s thesis performance was the Rise of the Queens production, which was presented at the Helsinki Music House on 13th March, 2015 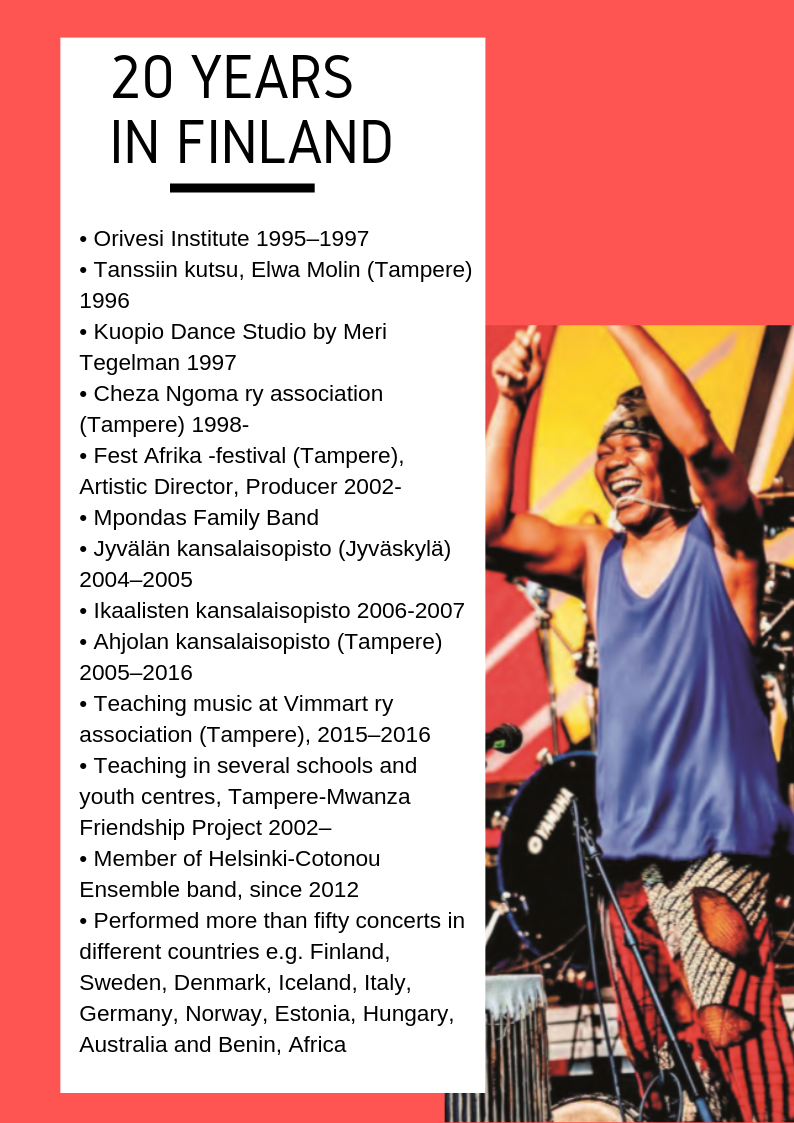 Menard’s future looks very international. The first Afro-Nordic seminar was held in Fest Afrika in 2014. The aim of the Afro-Nordic network is to create opportunities for cooperation between musicians, event organizers and music schools. The network is constantly expanding. Activities between the Nordic countries and certain African countries will be developed further. In the near future Menard is planning to travel to Mali, Tanzania and Ghana to strengthen his contacts and create new ones. Denmark, Iceland and Finland are the most committed to the network among the Nordic countries. The programme of Fest Afrika has expanded into film, poetry and clothing shows and there will be new initiatives to come. Fest Afrika is also spreading to other countries as the first festival in Reykjavik took place in the autumn 2016.

Four of the Mponda siblings live in Tampere, namely Menard’s sister Catherine Knuutila and his brothers Deogratius and Michael. They all perform together as the Mponda Family singing songs from their home region accompanied by the drums. From time to time Catherine conducts Cheza Ngoma’s dance rehearsals since she, too, has studied at Bagamoyo. Menard has two children in Finland, Sikujua and Ella. Sikujua has already represented Finland in an international dance competition.